Click for a hub of Extension resources related to the current COVID-19 situation.
COVID-19 Resources
Menu
(Last Updated On: December 1, 2010) 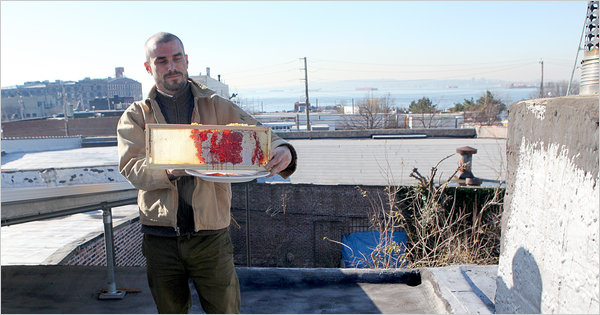 Someone forwarded a link to this New York Times story yesterday, and it got me thinking about the junk that honey bees eat.  Every fall, people report problems with honey bees being attracted to trash cans, soda cans, and all variety of sweet things.  I’ve always believed this phenomenon was due to the combined effect of a declining natural supply of nectar and possibly an enhanced craving for carbohydrates prior to winter (stoking the fires for a long, cold winter).

While the honey bee PR groups would probably prefer to keep this nasty habit hidden, some Brooklyn bees recently got caught “red handed” by their beekeeper when they raided a maraschino cherry factory over half a mile away.  It seems that Red dye #40 is pretty persistent stuff, even after it’s been processed into honey.

According to the story, the beekeeper noticed that “…where there should have been a touch of gentle amber showing through the membrane of their honey stomachs was instead a garish bright red. The honeycombs, too, were an alarming shade of Robitussin.”  Yuk.

Most of us like honey for its taste.  I also like it sometimes as an alternative to the cane sugar or corn syrup stuff so common in our daily diets.  What, after all, could be more natural than honey? After reading this story and reflecting on all the bees I’ve seen around dumpsters in the fall, maybe lots of things.   Is my breakfast honey really just someone’s recycled Mountain Dew?  If the bees get into a can of Red Bull, will I end up with a little caffeine kick too?  Is nothing pristine anymore?