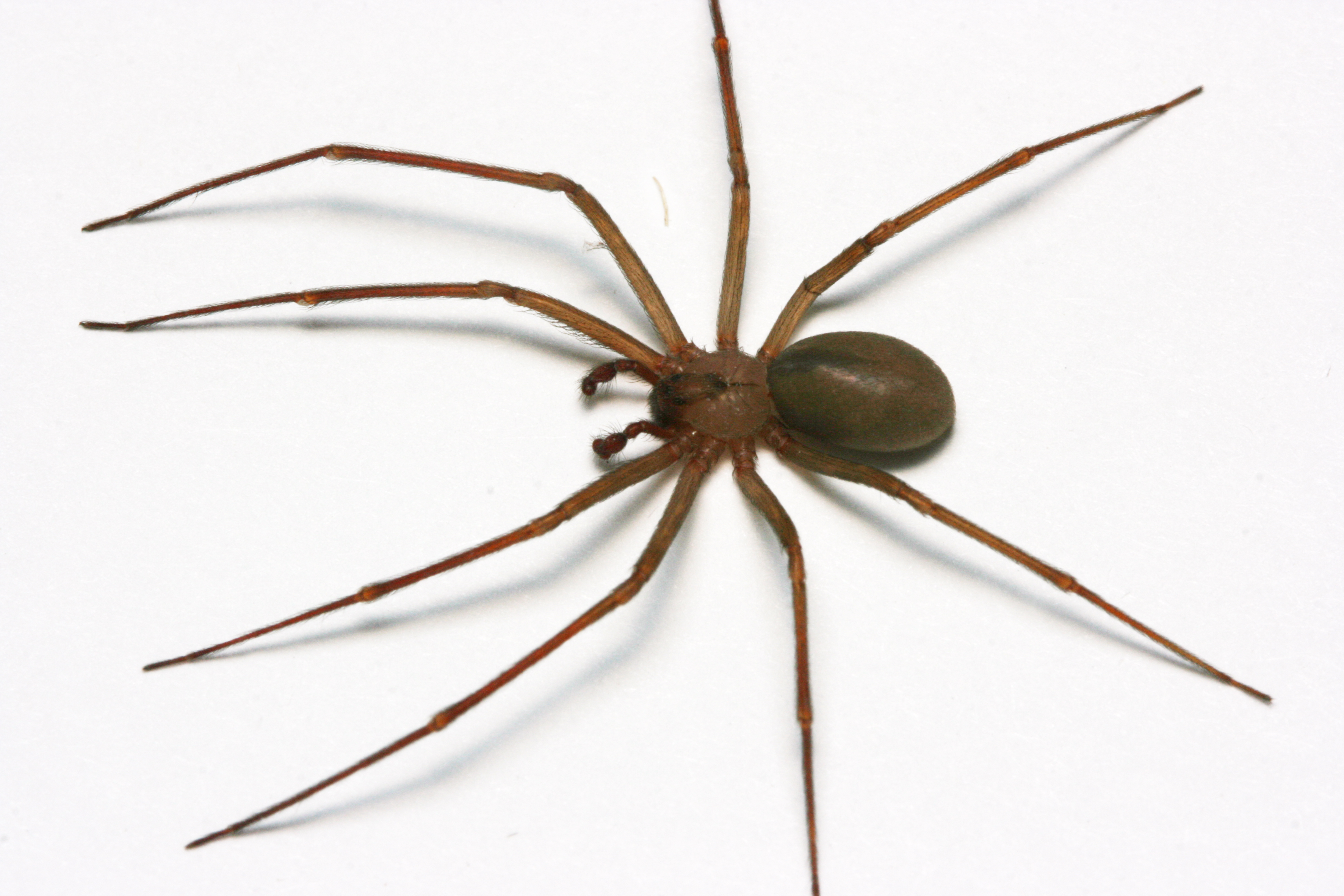 Brown recluse spiders range in color from tan to gray. Slender, tapering legs and a brown, violin-shaped mark on the head are distinguishing features.

One of the most dreaded household pests in Texas is the brown recluse spider. Although brown recluse spiders frequently coexist with humans in homes without incident, when bites do occur they can be serious. Besides being painful, bites sometimes result in secondary infections, disfiguring skin ulcers, pain and, rarely, life-threatening complications.

As its name implies, the brown recluse is shy and not naturally aggressive. It is most often found in sites that are rarely disturbed, such as under old boards, in piles of discarded junk, and in seldom-disturbed storage spaces in houses and outbuildings. Indoors, they are most common in cluttered closets, garages, crawl-spaces, and attics.

Brown recluse spiders are hunting spiders and do not seem to spend a great deal of time on webs. When webs are constructed, they are inconspicuous and built in protected sites. Nests serve as a place to lay eggs, and as a retreat. They are usually constructed in dark, out-of-the-way corners, in boxes or under debris. Brown recluse spiders are mostly nocturnal, coming out at night to hunt for their insect prey.

It’s possible for the non-expert to identify the brown recluse spider. Look for a light brown to greyish spider, with slender legs extending over an area about the size of a quarter to a half-dollar. Two characteristics that help distinguish this spider from similar species include the dark violin-shaped marking on the back of the front portion of the body, and the semicircular, paired arrangement of six eyes.

Adult brown recluse spiders are most frequently seen during the spring months. Mating season in Oklahoma, Arkansas, and Texas, lasts from April to early July, during which time female spiders produce up to five egg sacs, containing about 50 eggs each. The length of time required for development to the adult stage is slightly less than a year, and in the laboratory, spiders have been observed to live for up to two and a half years.

Because of the seriousness of a brown recluse bite, the best solution to a household infestation of these spiders is to hire a professional pest control company.  Even for professionals, infestations of the brown recluse can be difficult to control. Look for a reputable company that is willing to take the time to work with you and your infestation. A combination of insecticide and sanitation measures are usually required to reduce or eliminate a well-entrenched brown recluse infestation. Brown recluse spiders can be controlled using a four step, integrated approach:

Sticky cards, used commonly by pest control companies to monitor crawling insects, are useful for both control and monitoring of brown recluse spiders around a home or place of business.

Brown recluse spiders are insect predators. When large numbers of spiders are present in a building it usually means that insect prey are also abundant. Common prey for spiders may include crickets, silverfish, cockroaches, etc. Making sure doors are well sealed and outdoor lighting is shielded to avoid attracting outdoor insects like crickets.  Good sanitation, regular pest control, and vacuuming dead insects will also help reduce insect food for spiders.

Unnecessary clutter in the structure should be eliminated, spider webs should be removed from interior and exterior areas, and a thorough vacuuming should be undertaken around, under, and behind furniture. Brown recluse spiders are frequently found in and around boxes stored in closets and attics. Stored boxes should be tightly taped shut to eliminate the availability as a nesting site. Clutter removal is best done before your pest control professional arrives.

Sticky cards readily trap brown recluse spiders, and do provide some spider control. Placing sticky cards in out of the way locations, especially next to walls, in closets and under furniture, can not only remove some of the spider population, but will allow you and your pest control provider to track the effectiveness of your control efforts over time.

Residual sprays. Liquid insecticide sprays should be applied to the exterior foundation, eaves, edges of closets, storage areas, and room perimeters, if necessary. Sprays with long-residual killing activity should be selected.  Certain products using botanical extracts and oils may provide short-term repellency or control, but have not been tested against brown recluse spiders and are not likely to provide as long-term control as some of the pyrethroid insecticides listed below.

Residual dusts. Residual insecticidal dusts should be applied in wall voids, attics, and inaccessible crawl spaces. Dusts penetrate places that cannot be reached by sprays, and often provide longer control. Area-wide treatment of attics is generally not recommended because of the risk in contaminating belongings in storage areas and possible drift into house living areas via gaps around light-fixtures and in ventilation systems.

ULV or Aerosol sprays. An ultra-low volume (ULV) or aerosol treatment with pyrethrins or resmethrin may be useful in certain situations.   Alone, ULV treatments are not likely to be effective in controlling spiders;  however they may be helpful in suppressing spider prey in attics and in otherwise inaccessible areas, such as under wood shingle roofing.  They may also irritate spiders to move and contact surfaces treated with residual sprays and dusts.

Research conducted at Oklahoma State and Texas A&M Universities has confirmed that brown recluse spiders are difficult to kill with most insecticides. Among the various liquid spray formulations, pyrethroid insecticides (e.g., Demand® CS, TalstarOne®, Suspend®, Tempo®, and Demon®) appear to give the improved control, compared to older carbamate and organophosphate chemicals such as Ficam®, Dursban® and Safrotin®. In one trial, the pyrethroid insecticide bifenthrin (Talstar®) showed toxicity with no significant repellency to brown recluse spider adults.

The surface to which sprays are applied affects the duration of killing power. Spray treatments applied to wood and masonite surfaces controlled spiders only up to seven days. Residues on some vinyl surfaces provide good control up to 60 days after treatment.

Tempo® Dust (cyfluthrin), a pyrethroid dust, has been evaluated by Texas A&M University and provided relatively rapid kill of brown recluse spiders under laboratory conditions. A related pyrethroid insecticide, DeltaDust® (deltamethrin), is also available to pest management professionals and may also be effective against spiders.

For more information on brown recluse and other spiders, request publication E-408, Spiders.