Every year brings its own oddities of entomology. Some years caterpillars strip trees bare in the spring, other years grasshoppers arrive in hoards.  This spring I’ve had a couple of reports of a small insect called a treehopper, sometimes in large numbers.

Treehoppers are surely one of the most curious looking insects encountered by gardeners. They feed on plant sap, like many insects found in trees, but rarely seem to do much damage.  The most distinctive feature of the treehopper family is an upright, fin-like structure arising from the shield behind the head (pronotum).  In many species this structure resembles a tree bud or a thorn, and leading to one common name for this group, “thorn bugs.” There are thought to be about 280 species of treehoppers in the US, Canada and Mexico. This pretty green and black treehopper may be common on some oak trees this summer. Photo by Jonathan Garcia.

Last week I was alerted to a swarm of treehoppers landing on a family’s car in Dallas, TX (thanks to Master Volunteer Entomology Specialist, Mary Morrow for this video).  The pretty black and green insects were Smilia camelus, a relatively common treehopper on oaks.  I’ve never noticed these insects before, nor have I had reports or questions about them in 28 years here in Dallas. It is just another example of how nature can surprise us, and of the amazing diversity of life one can find even in the middle of a city. Oaks support the greatest diversity of treehoppers, though each species has its own tree preferences.  Another interesting treehopper I’ve photographed is the twomarked treehopper, actually thought to be a complex of closely related species. Adults of this genus are easily identified by two white spots on the back of its thorn-like horn, and by the white, cottony egg masses they lay on twigs.  The exact species within this genus are difficult to identify, though some species specialize in just a few plants. 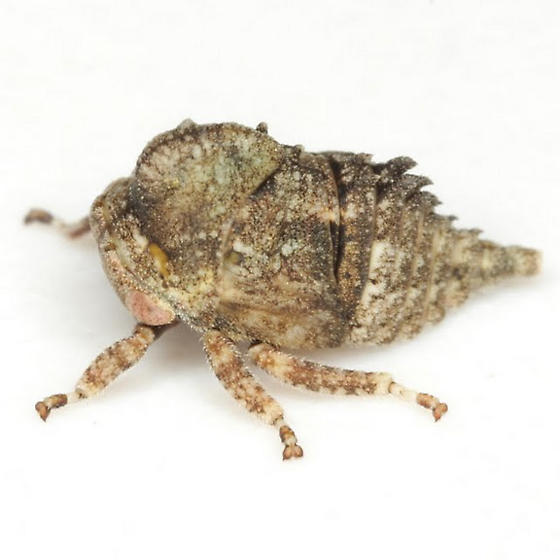 The nymphs of treehoppers look like something you’d expect to encounter at a prehistoric punk rock concert.  I half expect, when looking at one through the microscope, to see it sporting a nose ring.  Treehoppers go through a gradual form of metamorphosis, so there is a sort-of resemblance between the nymph and adult. But nymphs have a more razor-backed appearance and the prominent fin is usually not as evident. The nymphs commonly stay together after birth, and may be seen following an adult, presumably mommy.

It’s surprising to me, given the beauty and oddness of treehoppers, that more is not known about these insects. So let me encourage anyone with a keen eye and clear camera lens to consider photographing thorn bugs whenever you encounter them, and submit your pictures to Bugguide.net. This is one small way to increase our knowledge of this beautiful and quirky family of insects.