Click for a hub of Extension resources related to the current COVID-19 situation.
COVID-19 Resources
Menu
(Last Updated On: November 6, 2015) 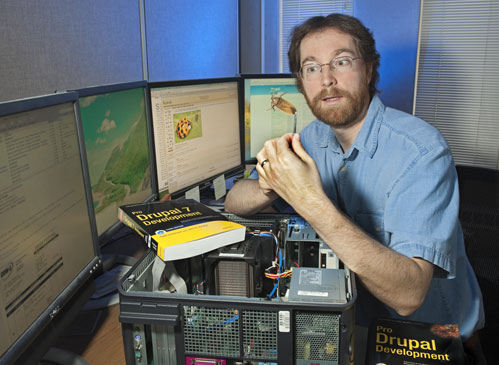 John VanDyk, systems analyst for Iowa State University, and one of the developers of BugGuide.net. Photo by Bob Elbert.

One of the links we include in the Insect Identification Help page is BugGuide.net.  This is a great site for insect identification and networking with knowledgeable entomologists willing to help anyone get an insect identified. I use it a lot and direct insect enthusiasts there frequently.  Until now, however, I didn’t know a lot about how the site came to be.

A recent story from Iowa State University profiles one of the developers of the site, ISU systems analyst  John VanDyk.  Turns out that not only is John an entomologist, with MS and PhD degrees in that field, but he’s also the developer of Drupal, an increasingly popular web development tool (that even I have heard of).

If you think insects are cool, and would like to learn more, BugGuide is a great resource.  Check it out.