Click for a hub of Extension resources related to the current COVID-19 situation.
COVID-19 Resources
Menu
(Last Updated On: July 27, 2010) 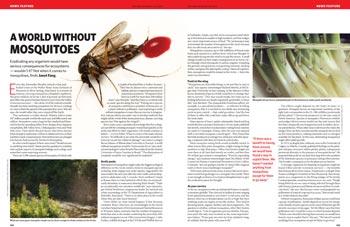 An article in the July 21 online edition of Nature magazine posed researchers the question, “Would it be a good thing if all mosquitoes were eradicated from the earth?”  I’ve often been posed a similar question in slightly different form, namely, “what good are mosquitoes?”

Aside from the purely speculative question that Nature asked (we couldn’t get rid of all the mosquitoes in the world in a thousand years if we tried), perhaps a more realistic question would be, “If we could get rid of even one mosquito species, should we?”

Humans have been sadly effective in causing the extinction of species from the dodo bird to innumerable beetles and butterflies and other creatures.  Most of the time it is accidental, or through neglect.  Habitat destruction is probably the number one cause of species elimination.

Now, through the power of biotechnology it may be possible to cause the deliberate extinction of certain species.  So, if we had the power, should we do it?  There are powerful arguments on both sides.  Some scientists have argued that if we could destroy all the species of Anopheles and Aedes mosquitoes, for example, the world would be a better place.  These are some of the issues debated in the Nature article.

As the writer points out, there are many species which appear to be pests to us humans, but which hold together strands in the web of life.  We humans have never been very good at predicting what would happen when you pull one of those threads.  Eliminating all species of no-see-um flies (a family known for its painful bite and transmission of certain viruses, protozoa and filarial worms), for example, would include elimination of a species of these flies that pollinate the cacao tree. As the Nature article threateningly proposes, “Imagine a world without chocolate!”

I am still dissatisfied with my answer to the question about the “usefulness of mosquitoes”.  But I’m not convinced that when we play god over mosquitoes (or any other pest) that we might not be getting more than we bargain for.